In this experiment, I'll be growing beautiful iridescent crystals out of pure bismuth metal. These "hopper crystals," as they are known, form completely naturally as molten bismuth cools and solidifies. They aren't found in nature, however, because of the specific circumstances required to make them. People make these in labs and sell some pretty amazing samples on eBay. The process is very simple, and is easy for anyone to do at home.
Bismuth melts at 521 degrees F, so it can be melted on a stove top. As the metal cools from its liquid state, it forms almost perfectly square crystals in a sort of spiraling stair-step pattern. When exposed to air, it immediately tarnishes and forms a very thin layer of oxide. Different thicknesses of this layer reflect light differently and form a beautiful pattern of rainbow colors. To make large single crystals, the metal must be cooled very slowly to give them time to form. To get the best quality crystals with the most colors, very high purity bismuth must be used. I used 99.99% pure bismuth here, but I also have some 99.9999% pure electronics grade stuff that was very generously donated by a coworker. I'm waiting to use this until I perfect my method of cooling and crystal extraction.

This experiment is very simple to do. First, I melted my bismuth by setting my stove top on high. Then, I poured the molten metal into a different, clean container. This eliminates all of the slag that forms on the surface of the metal, and the clean container allows for better crystal growth. Next, I suspended a seed crystal of bismuth in the center of the molten mass. This step allows the crystal to grow unobstructed in all directions, without running into other crystals or the sides of the container, and should result in a larger crystal. If I time it right, this should also allow me to pull the crystal directly out without having to pry it off of anything. Next, I waited until the metal was about halfway cooled. This was hard to gauge, because you don't want to disturb the metal too much while crystals are growing. If you do this, it causes new crystals to start forming rather than continuing to grow a single large one. I tested it by gently tapping the surface with a graphite rod. Once it was half liquid and half solid, I poured off the liquid into another container. The solid contains my newly formed bismuth crystals, which tarnish in air immediately to form the characteristic iridescent sheen. 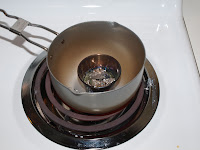 My melting setup was a small pot on the stove top, with a smaller steel cup inside that actually contained the metal to melt. I did this because the smaller container would make a deeper pool of metal to grow the crystals in. I used about 100g of bismuth. 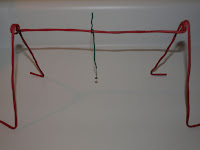 This is my method for suspending a seed crystal in the metal. I melted a small piece of solid bismuth onto the end of the green copper wire, which will be hung down into the molten metal. 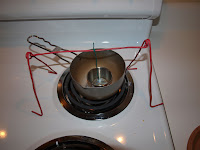 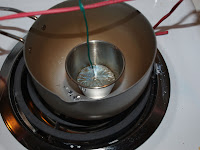 After the bismuth was fully melted, I poured it into a new, clean container and suspended my seed crystal so it would hang just below the surface of the metal. I turned the stove off and let it cool. This allows for some temperature control, as the heating element cools slowly on its own. I could get better control if I dialed it down slowly myself, which I'll do in future tests. I waited until it was halfway solidified, and poured off the liquid. 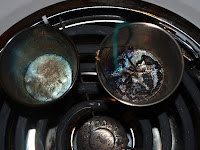 The cup on the left holds the liquid I poured off, and the one on the right contains my crystals. I waited just slightly too long, so my central crystal that grew from the seed was attached to the bottom. 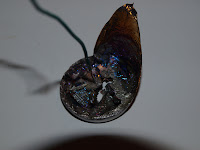 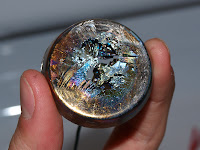 Top and bottom views of my solidified bismuth after knocking it out of the container. All the metal in this picture (except for the copper wire) is pure bismuth. You can see the crystals locked together in the top picture, which I had to pry apart from each other. This is easy to do, because bismuth is very similar to lead and so is soft enough to bend and snap apart easily. This must be done carefully though, to not damage the crystals or scratch the thin oxide layer. The bottom of this piece showed some really beautiful crystal structure and colors as well.

The final product - my bismuth metal crystals. Click the picture for a much larger view so you can really see the details. They were only each about the size of my thumbnail, but that's only because I used a small amount of metal and there wasn't a lot of room or time to grow. Not too bad for only my third try at this!
Posted by Dan at 11:44 AM