Get Useful Components from a Lantern Battery

Here's a cheap, easy way to get three very useful items for your own experiments - carbon, zinc, and manganese dioxide. All you need is a 6V lantern battery and a few common tools. You want to make sure you buy a carbon-zinc type battery. If it says "heavy duty" or "ultra heavy duty" on the sticker, then you're good to go. If it says alkaline anywhere on it, this procedure will not work as that uses a different battery chemistry. I used an Everready Heavy Duty battery, which didn't mention carbon-zinc, but I've seen this done before with this battery type so I knew it would work.

First, pry open the outer casing. I ended up cutting through the sides with a box cutter, which probably wasn't the most efficient way, but it worked. Inside, you'll see four individual cells that look like very large C batteries. Separating out one of them, I performed the following steps. 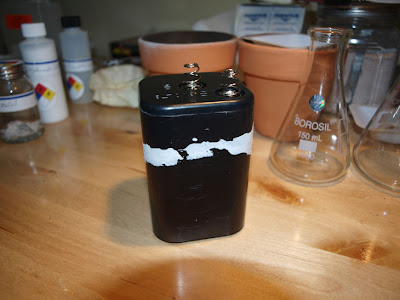 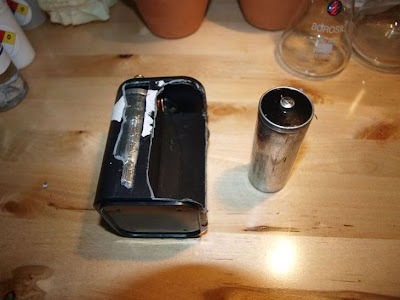 Cut open or otherwise pry out the plastic lid at the top of the cell. Once this is done, you can slowly pull out the carbon rod sticking out of the center (I used a pair of pliers). Be careful here, because carbon rods are fragile and easy to break. Now, use a screwdriver or other implement and dig out the inner electrolyte material. This is manganese dioxide (MnO2) mixed with either ammonium chloride or potassium chloride, and has the consistency of wet soil. There will also be some bits of paper mixed in, which is used to keep the MnO2 from contacting the wall of the cell. You'll want to remove this by hand. When I did this, the canister heated up a bit when some of the MnO2 contacted the zinc wall and reacted with it. Next, mix your recovered MnO2 with a good amount of water to dissolve the soluble chlorides, and filter it out. This will give you relatively pure, black MnO2 powder. You actually get a lot of manganese dioxide from these - I got just under 30g from just one of the four cells. Finally, wash out the interior of the battery's canister. This whole outer can is pure zinc metal! I melted mine down in a crucible to easily get rid of the impurities and make a nice compact brick, which weighed about 15g. 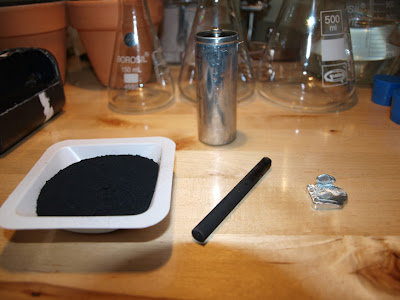 Manganese dioxide is a very useful chemical which I use in a number of reactions - as a component of thermite and as a good catalyst, for example.
The carbon rod will be used in an upcoming experiment as an electrode, and is a good thing to have if you're doing electrochemistry. I also use a carbon rod to stir molten metals, since it won't melt and won't introduce impurities into the metal.
Finally, the zinc metal is another useful laboratory reagent. It's used to generate hydrogen gas from hydrochloric acid (via 2Zn + 2HCl -> 2ZnCl2 + H2), and is a good addition to my element collection. I'll also be using it (in powder form) in another upcoming experiment.
Posted by Dan at 2:30 PM