This is an experiment I've had since the very beginning of my home laboratory, but for some reason I never got around to doing it. This is a single replacement reaction that precipitates pure silver metal out of a solution of silver nitrate in the presence of solid copper metal. The silver grows on the copper in very fine, hairlike crystals. After a while, they become thick enough to look almost like clouds (see the photos below). The reaction goes fairly quickly at first then slows down - mine appeared to be done after about 30 minutes, but I left it to stew for a few hours to make sure I got all the silver out of solution.

I used a 0.1M silver nitrate solution, created by dissolving 1.4g (more precisely 1.36g) of silver nitrate into 80ml of water. To start the reaction, I bent some heavy gauge copper wire into a coil and placed it in the beaker. It went surprisingly quickly at first, but I left it to react for a few hours to make sure all the silver was displaced out of solution.

This reaction is pretty nice visually - you start with a piece of shiny copper metal and a clear solution, and end with metallic silver and a very blue solution. The blue color is caused by the Cu 2+ ions present in solution. Copper nitrate isn't something you can pour down the drain, so I'd like to find some use for it. I may try to evaporate the water and crystallize it out into a solid, and store it for later.

Preparing for the experiment. 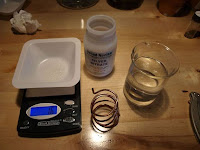 About 3 minutes after placing the copper in the solution. 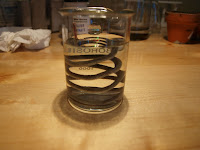 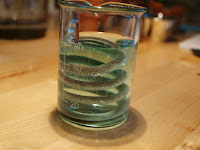 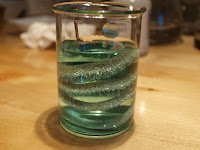 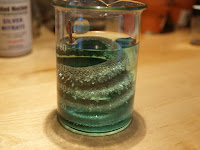 After 32 minutes - the reaction was mostly done by now, but I left it in for a few more hours to ensure all the silver had been deposited. 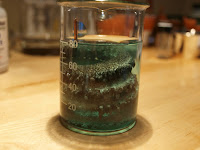 After just under 3 hours, I stopped the experiment. 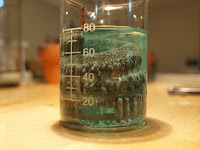 The crystals were extremely fragile, and knocked off easily. You can see the copper is almost as shiny as it was in the beginning. 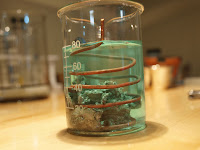 I recovered 1.7g of silver metal. This was more than the 1.4g of silver nitrate I used, so I can only assume there is still some liquid trapped in it, since it was quite spongy. The theoretical maximum I could get is only about 0.9g, because there is 63.5% silver in silver nitrate by weight. Further investigation is necessary! 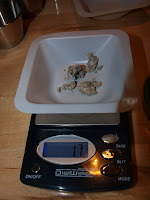