This post will go into detail on how I constructed the backboard for my element display, including cutting it into sections to make it transportable, drilling the required 360 holes, and attaching the sections together in the final configuration. To read about the project as a whole, see the introduction post. 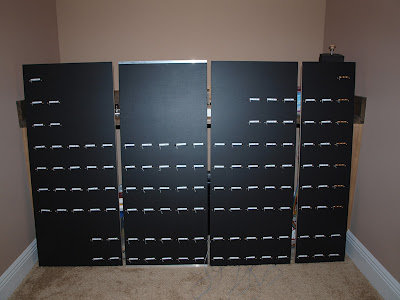 The backboard is constructed of ½” thick plywood with a nice birch veneer (called “Sandeply” from Home Depot), and is split into four sections. Each split was located so as to not cut a shelf in half, and to break the board into roughly equal sections. These splits also governed the placement and wiring of the LED segments, which will be addressed in a later post. Splitting the board was done to make it easy to transport, as I mentioned above. The overall dimensions are 48” tall x 65” wide (about 4ft x 5.5ft). I first drew a grid over the whole front side, with the intersection points being where shelf holes would be drilled. Obviously not every point needed a hole, just the ones that formed the shape of the periodic table. 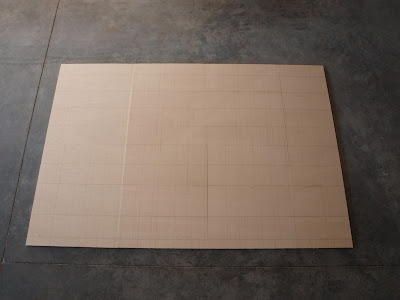 I then carefully drilled out ¼” holes for all of the shelf pins for the 120 shelves needed (that’s 240 holes). After that each shelf also needed a single 1/8” hole for the LED wiring to go through, for an additional 120 holes (making 360 holes drilled total!). To guide me in drilling out these holes, I came up with a schematic detailing where the grid lines should be drawn and which intersection points actually needed holes. The colored squares represent each shelf, with the top two corners of each being where the mounting holes had to be drilled. 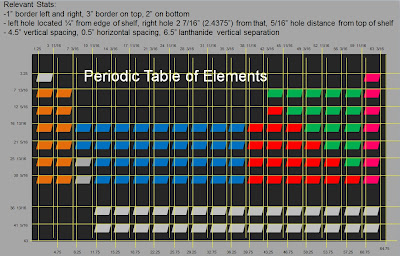 I also used a spade bit to drill one final ½” hole in the bottom left corner of the display, to allow the master controller for the LEDs to be mounted on the front (with power and data cables passing through the hole to the back). This doesn’t appear in any of the pictures, because this one was not actually drilled until right at the end of the project.

Next the boards were painted, first with a gray primer and then two coats of flat black (both latex-based paints). Before painting, I plugged all the shelf holes with wooden dowels to prevent paint from dripping in and making the shelves not fit any more. The wiring holes I wasn’t worried about, because those didn’t require a precise size. 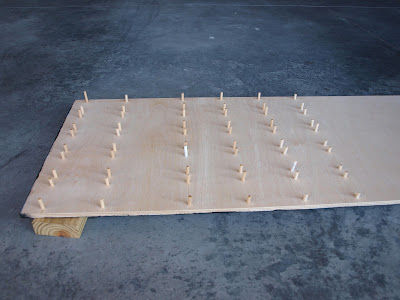 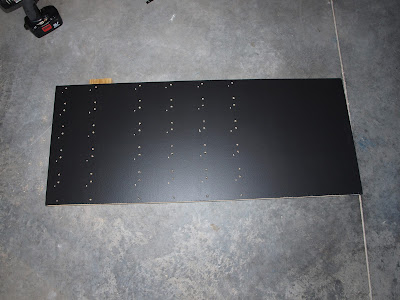 I also wanted a border for the whole display, to help hold the sections together and give the edges a nice finished look. For this I used a ½” aluminum channel that I cut to size.
Finally, the backboard pieces needed to be connected together with a system that makes them easy to uncouple when needed. For this I used three L-brackets per split, located at the top, middle, and bottom of the boards. The brackets are secured together with snugly-tightened nuts and bolts. 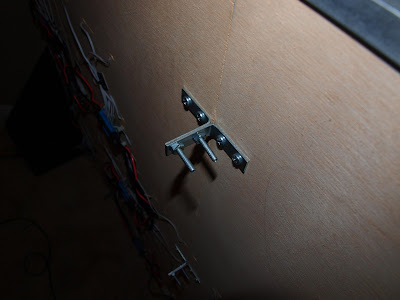 Finally, I wanted the entire display to be free-standing. To do this, I attached wooden triangles to each end of the display using screws carefully drilled into the side of each end piece. I also used L-brackets as seen above to secure them in place. Each triangle is attached with one screw and one bracket. Conveniently enough, I had some spare wood left over from the original sheet of Sandeply that I bought, so I cut this into a square and made another cut diagonally to create the two triangles. These were painted in the same way as the rest of the wood. 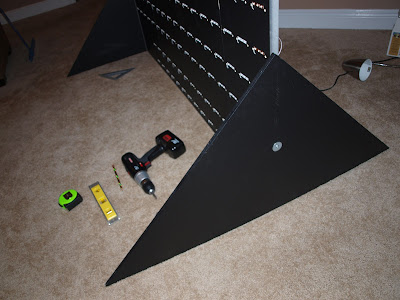 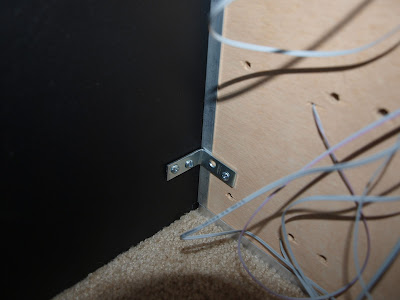 All this work formed a sturdy base construction for my element display, to which acrylic shelves, LEDs, and all their associated control circuitry could be attached. See the relevant posts for more information!
Posted by Dan at 6:03 PM