This post will describe the LED lighting scheme I used to illuminate my element display, including where I sourced the LEDs, how they are attached to the backboard, and the table’s overall color scheme. To read about the project as a whole, see the introductory post. 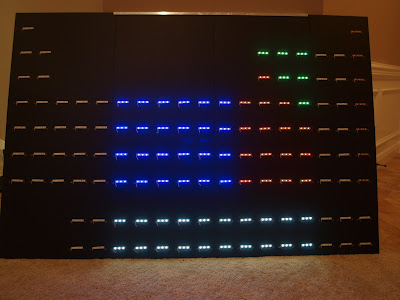 I wanted the display to be illuminated to give it a real “wow factor” and really bring out the different sections of the periodic table. In my design, I placed the LED lighting behind each individual shelf rather than behind where the element actually sits. This way, the shelf itself is illuminated and transfers the light throughout its thickness, which ended up looking really slick. The downside to this is that the actual element samples can be hard to see when the room lights are off, but that could be solved with some soft down lighting in the display space.

The LED lights were purchased as 5 meter rolls from Torchstar (http://stores.ebay.com/TorchStar), an eBay seller with phenomenal prices. I also wanted to mention ElementalLED (www.elementalled.com) here – they provided a lot of great assistance to me in the planning stages, and I used their LED strips to build my prototype designs. Their customer service and depth of knowledge is really great. The pink LEDs were purchased from them (as a single strip), and the rest from Torchstar (as rolls). No companies paid me to say these things – I am just giving some positive feedback of the great experiences I had with each. 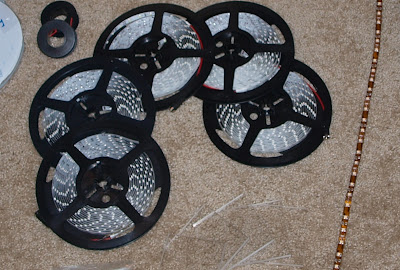 The LED ribbons are cuttable every 3 LEDs, or 2”. This is the perfect size to fit directly behind each shelf, since shelves are 3” wide and the pins take up about ½” of this space. Conveniently enough, these ribbons have an adhesive backing so they are easy to stick to their proper places on the display. I first cut the rolls into the individual 2” strips that I needed, and then soldered thin ribbon cable to the contacts. Here's a video of my process - the first half is assembling the shelves (which I talk about in a separate post).

You can see the solder dots on the left side of each strip in the picture below. This needed to be done 120 times – though there are only 118 elements, I have two extra shelves as placeholders for the lanthanide and actinide series. I had to take extra care to keep their colors straight - there are no distinguishing markings at all on the strips themselves! 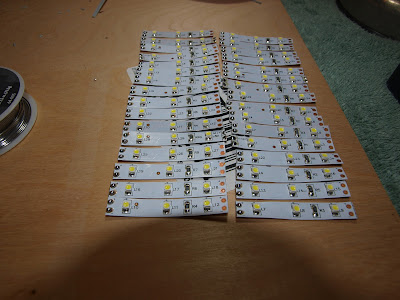 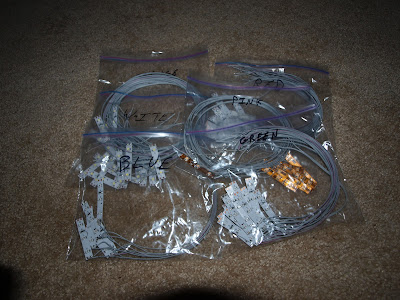 I used 6 colors because that was about the most variety I could find among single-color LEDs of this type. I considered using RGB LEDs, but it would have increased cost and complexity on an already very expensive and complex project. Looking back on it and knowing more about the controllers I’m using, it sure would have made for some amazing effects! I’ll probably go this route for Display 2.0 (if that ever happens). The six colors I chose represent different sections of the periodic table. There might be some differences from what you are used to, because definitions vary and there are a few different designs of the periodic table. As of now, there is no officially recognized, definitive table. I chose a nice-looking candidate and based my color scheme off of that. 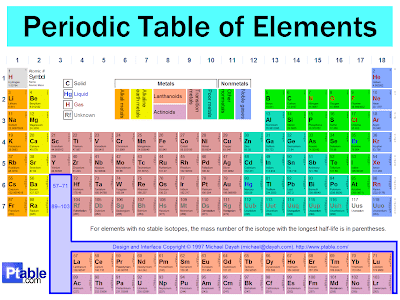 My colors are as follows:

All 120 of these LED ribbons feed their wires to the back of the display, where they connect with the LED control circuitry mounted there. Each 3-LED strip requires 12V @ 20mA, so all the LEDs at full illumination require 2.4 amps! Check out the following links for more info on the backboard construction, acrylic shelves, and the LED control circuitry portions of this project!
Posted by Dan at 6:04 PM