A video of this reaction can be seen here.

This experiment is a simple way of making a solution that changes color on its own through purple, blue, green, and yellow. I decided to try something different for this one - it doesn't end in fire! It's still pretty interesting though, and actually very easy to do with relatively common ingredients. All you need is water, sugar, sodium hydroxide (NaOH, also called lye, a cleaner), and potassium permanganate (KMnO4, a disinfectant and water treatment chemical).
The first photo shows all the materials I used. I don't have any sodium hydroxide, but I do happen to have a pound of sodium metal lying around. When mixed with water, it forms sodium hydroxide solution via the reaction
2Na + 2H2O -> 2NaOH + H2
This process is hot enough to melt the sodium, and ignite the hydrogen gas if a large enough piece is used. I used a few tiny chips of sodium, which I thought would just fizz safely. I was wrong. They fizzed for a moment then exploded with a sharp pop and bright orange flame, which surprised me to say the least. So even though this one didn't end in fire, it unexpectedly began with it!

To do this reaction, I used 100ml of water in a flask and 30ml of water in a small beaker. I didn't measure out the solids too precisely, so I just used about a spoonful of sugar, a few small chips of sodium metal, and a pinch of potassium permanganate. I first reacted the sodium with the water in the flask to make the NaOH solution, then dissolved the sugar into it. Into the beaker, I added the KMnO4 to make a deep purple solution. Then, I poured about 10ml of that into the flask. Over about 40 seconds, the color changed very smoothly - going through purple, blue, green, orange, and finally ending in orange-yellow. After letting it sit for a while, a brownish solid settled out on the bottom, leaving the rest of the liquid completely clear again. The colors were a bit dark when I did it, which I think I can solve by diluting the beaker solution to make a lighter purple color.

I'm not sure what exactly the equation is for this reaction. It's been difficult to find anything except videos online. Here's what I do know:

- I confirmed that the precipitate is indeed manganese dioxide, MnO2, as I suspected. I filtered and dried out the solid from the solution, and placed some in a test tube. I added a few milliliters of hydrogen peroxide, which reacted with bubbles and heat. I had done this reaction before, to produce oxygen gas, so I knew this was the same reaction. To confirm it, I did the test for oxygen: I lit a piece of wood on fire, blew it out, and while it was sill smoldering I placed it into the test tube. It re-lit and burned with a bright flame, confirming the high concentration of oxygen gas in the tube. MnO2 acts as a catalyst for the decomposition of peroxide, which turns into oxygen and water via the reaction 2H2O2 -> 2H2O + O2.

- Sodium hydroxide only serves to regulate the pH of the solution, and doesn't take place in the reaction itself. Thus, you don't need much of it for the reaction to work properly. 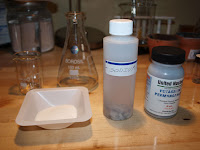 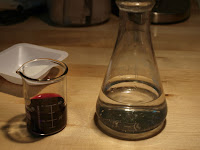 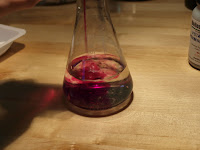 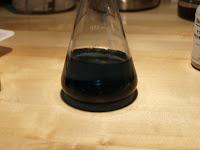 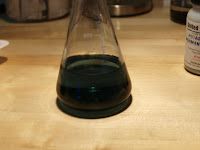 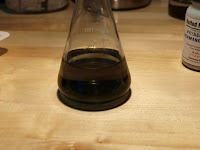 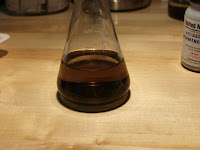 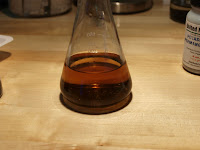 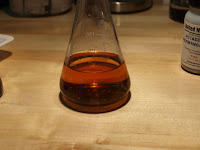